The Canadian artist Michel de Broin works at the interfaces of art, technology, and physics. His interdisciplinary practice is based on an artistic-scientific exploration of productivity, consumption, and waste. He examines the logic of familiar objects in their ecological cycle and takes them as a starting point for further sculptural development. The artist has become known primarily for his walk-in sculptures and large-scale installations—a tree with its crown growing back into the ground, an oversized disco ball hanging from a crane in the middle of town, or a soccer field with lines consisting of small fences, making the game significantly more difficult to play.

At Silbersee II, Michel de Broin will be experimenting with the resource responsible for the lake’s creation, as it is actually a flooded quartz sand pit. For his work called Treasure, the artist enlarged one of these grains of sand and devoted a sculptural, glistening monument to it on the lake. 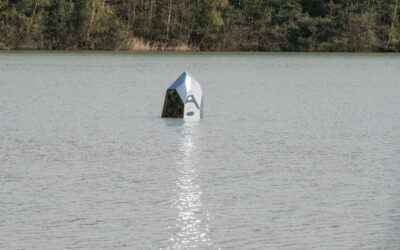 With the sculpture Treasure, Canadian artist Michel de Broin will build a monument to the natural resource of sand and its unique potential.

On the occasion of the Wandersalon the artists Deborah Ligorio and Michel de Broin will be in conversation with the curator Vlado Velkov and Britta Peters, artistic director at Urbane Künste Ruhr.