The collaboration between the Japanese media artist Yukihiro Taguchi and the Italian designer Chiara Ciccarello goes back to their activities in Berlin’s fallow Cuvry. As a reaction to the aggressive real-estate market in Berlin and to the difficulty of finding an affordable apartment in the city as a freelance artist duo, in 2013 they built a house using the simplest of means on a vacant plot along the banks of the Spree River in Berlin’s Kreuzberg district and lived in it for a year and a half. Other self-erected houses soon joined theirs, giving rise to a large, illegal residential settlement, which was cleared away by the police in September 2014. The house by Taguchi and Ciccarello was able to be fully dismantled and saved. Today, it circulates through various international exhibitions and will be on show at the Silbersee under the title Discuvry as part of a newly developed architecture. 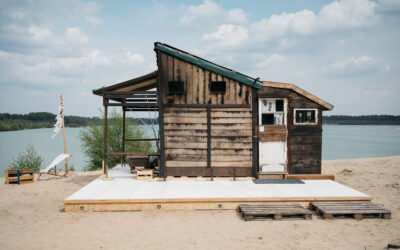 Confronted with the harsh reality of the Berlin property market the artists created their own housing, half shelter, half architectural installation made from recycled materials