Monster Chetwynd stages performances and plays featuring handcrafted, phantasmal costumes and stage sets. Her sculptural works also appear to have arisen from mystical stories, fairy tales, or science-fiction comics. There are gigantesque slugs glowing in the dark and deep-sea fish or monstrous heads. The artist also draws inspiration from shamanism, the works of magic realism, or even from animal documentaries. Not only are her works inspired by existing narratives and myths, but she also tells new stories. Chetwynd’s figurative sculptures often seem as if they were frozen within the plot. The process of their creation—the imperfect, the handmade, the spontaneously assembled — can be clearly seen in the results of Chetwynd’s artistic work.

For Ruhr Ding: Klima, Chetwynd conceptualised a new sculptural installation around the former tram kiosk in Recklinghausen, featuring a live performer. However, the star role is played by bats—a species which, though discredited not least by the Covid-19 pandemic, is remarkably social by nature. 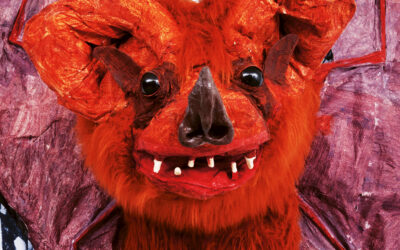 From a social and ecological perspective bats are model creatures from which humans can learn a great deal. This fact provides the starting point for Monster Chetwynd’s sculptural installation.