Johannes Büttner’s works of art, including videos, performances, and multipart installations, are devoted to the interdependencies between humans and technology and to the question of how these impact working reality. He is interested in the request-based gig economy, which is the subject of his most recent sci-fi video work The Factory, but equally in the working conditions of delivery drivers, which he investigates in the performance Untitled (Liefern). During one of Büttner’s readings, drivers from various services continuously delivered pad thai orders while he engaged them each in aconversation about their work.

In his installations, Johannes Büttner interrelates various objects and materials, including impressions in clay and cast concrete, different metals, found objects, and moving elements, all of which evoke manifold associations.

At the former Blumenthal coal mine, Johannes Büttner is presenting an adaptation of his 2019 artwork produced for the Istanbul Biennial, called The possibility of another life expresses itself directly in a cop car on fire and obliquely in the faces of my friends, and a new work. The sculptural elements of both pieces—moving humanoid cyborg figures and flying objects—combine in the colliery’s washrooms to form an overall installation. 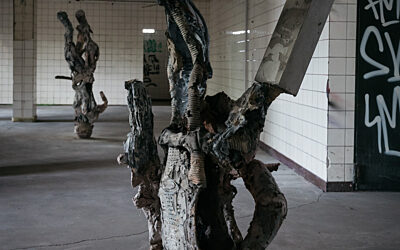 From the ceiling of the Weißkaue, Johannes Büttner suspends a type of mobile made up of a range of humming ventilators and wind gauges, together with claw-like hands.