For many years now, the duo Hecke/Rauter (Alisa Hecke and Julian Rauter) has been exploring the topic of taxidermy through installations, extended performances, and stage productions. To this end, they have conducted numerous interviews with taxidermists and scientists, using this research as a basis for their artistic work. A number of things can be learned from the taxidermy profession, its practice, and the artefacts thus created: the shifting relationship between human and animal is ultimately always inscribed in the stuffed specimen—be it a wild animal or pet—as is the way in which it is to be remembered. With more and more species becoming extinct, these objects play a special role as a means of recording natural history, while an increasing number of individuals wish to have their beloved pets preserved for all time as specimens.

For the project Der lange Abschied (The Long Goodbye) as part of Ruhr Ding: Klima, Hecke/Rauter are working with the set designer Franz Thöricht. The trio is developing an audiovisual installation for a 1950s kiosk in Gelsenkirchen, for which they collected new research material in the Ruhr region ahead of time. 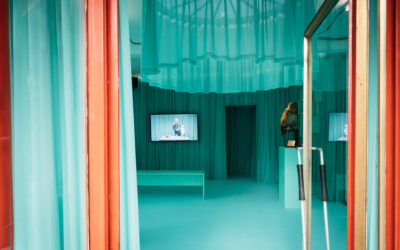 In their audio-visual installation, Alisa Hecke and Julian Rauter examine the practice of taxidermy and have worked together with scenographer Franz Thöricht to devise a space of reverence and memory.